Just decided to post a quick update to show that I’m still thinking about this place. 🙂

Over the summer and fall, I was getting 10-13 eggs per day from my 14 hens! Now, though, the winter’s low light has dropped them back down to 2-6 per day. Still, I’ll take it. They’re a joy to have and provide endless entertainment value. The roosters have become a bit more crotchety and protective, but they’re still not bad boys on the whole. You just have to keep an eye on them if you’re really close to them and wearing big, scary boots.

Our little kitten is no longer so little, although she’s small for an adult cat. She still enjoys rampaging throughout the house, mixed with periods of extreme cuteness. 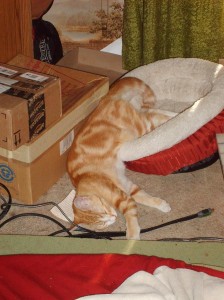 This year’s deer hunt resulted in a nice doe. Prior to that, I bought a trail camera for getting wildlife photos on my property. We got a lot of nice ones, but it was also pretty promptly stolen by someone trespassing in our fields. People seem to continually disappoint me in such matters. A police report yielded nothing so far.

Somewhat happily, though, the winter has been mild thus far, which makes it easier on the animals and me. Lower bills, less worrying about the chickens, more greenery to lighten my mood… I’m sure ski resorts and snowmobilers hate it, though. It remains to be seen whether we’ll have the same (nonexistent) winter of last year, or if it will get more gnarly as the season progresses.

The growing season mostly ended a bit early this year. Many crops were done in mid-September, either succumbing to disease or falling victim to a light, early frost that came on Sept. 16th. Most of the rest finished in early October, when a killing freeze claimed them. For now, I still have plenty of eggs and maple syrup for sale. I’ll be making new syrup in another month or two, though last year’s has been stored cool, sealed, and dark, and is just as good as it was when I made it. I also have red and white potatoes still, as well as some onions.

The kale is still going strong out in the garden, shrugging off temps in the high teens and low 20s as it always does. I highly encourage growing this plant. It’s so tough, and so nutritious besides!

I no longer have beets, because rodents got into them and apparently ate around 2 bushels worth of them.

There are always little troubles, but oh well – we keep on. Such is life.