The past two days were near 60 degrees and quite beautiful, although breezy. We’ve tapped some of the maple trees near our house, and the sap is flowing like crazy. Typical to the temperamental Western NY weather, though, it rained all night last night and isn’t going to break 40 degrees today. 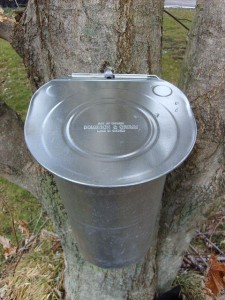 It’s alright, though. Mostly seasonal, temperate conditions help to ensure that trees don’t break dormancy too soon. Last year was a big disaster when 70s and 80s in March followed by several hard freezes in late March and April destroyed not only our own fruit crop, but the crops of many major orchards and vineyards in our area. Many people without any agricultural interests might be begging for the summer to begin, but those thinking like us are more likely to welcome the cold now, because soon the sun’s warmth will stay, and the leaves, blossoms, and greenery will return with more vigor for it.

Leeks will be one of the earliest, most vibrant editions to the spring forest floor, and we’ll be sure to be out gathering some up. We will also be utilizing our big new Excalibur dehydrator to preserve some. Those who might be interested in fresh or dried leeks can let us know at any time and we will notify you when they’re available. The price will depend on how the wild crop is, because we harvest very selectively to preserve the colonies of plants for the future, but we anticipate a good year.

The chickens never stopped laying all winter, though they were down to 2-3 a day at some points. Now they’re back up to 7-12 a day, and we’re starting to sell their eggs on Wholeshare. 🙂 While convenient for some in town, Wholeshare does charge a markup to our prices cover their own costs. If you come out to us to get the eggs, you will be charged a flat price (currently $3/doz.)

We bought six new chicks – 2 ‘Commercial Black’ layer crosses, 2 Dekalb Amberlinks, and 2 red pullets that could end up being Rhode Island Red, Production Red, New Hampshire Red, or Red Sex Links. Unfortunately, as I tend to do, I chose an odd one – the only grey one out of the batch of blacks. It was small to begin with, did not seem to be growing, and it stopped eating and drinking. We segregated it and tried to force some sugar water into it, but it passed away overnight one night. The others are all feathering out and appear healthy, and hopefully in a few weeks they can be integrated into the outdoor group.

Having been diagnosed with work-related ulnar neuropathy that is most likely Cubital Tunnel Syndrome, I’ve had some time off. It hurts me to be online, so I have been neglecting the updates here and everywhere else.

I’ve bought all the seed I need for planting this upcoming season, and we’re working on trying to build a homemade outdoor evaporator while I persistently stove-boil my maple sap and steam up the house (I do have finished syrup for sale by the pint or half pint). 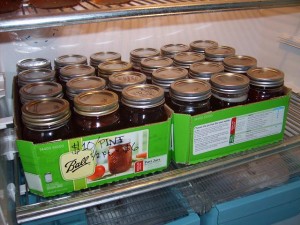 I’m hoping to get more done with the ‘orchard’ area this year too, especially since rodents killed a few of the trees over the winter.