I got the first egg from one of my Gold-laced Wyandotte hens a little over a week ago. Now another unknown Wyandotte has joined her in laying, and two of the Easter Eggers have as well. Yesterday was the best day for eggs so far – we found 4 in there, 2 brown and 2 blue. I have yet to find out exactly who the other 3 layers are. My Silver-laced Wyandotte rooster, Sigurd, gives an antsy, squawking alarm when a girl is about to lay, causing us much amusement. They’re all little pullet eggs right now, but they’re already getting a little bigger compared to the first ones. 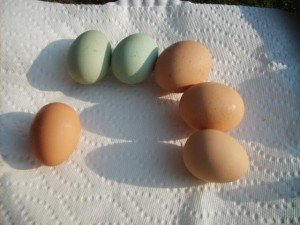 Harvesting is in full swing. Zucchini/summer squash and green beans are overwhelming me as usual. I just dug the Red Norland potatoes today, and while yields were poor compared to what I was expecting (I blame the drought), I still ended up with more than last year, so I’m not too displeased. Broccoli also did well. I have harvested all the first heads, so now only side shoots remain, but one of the first heads was measured out to be 14″ wide. This is 3″ wider than my old record, which was itself a gigantic head of broccoli. They were truly something else. 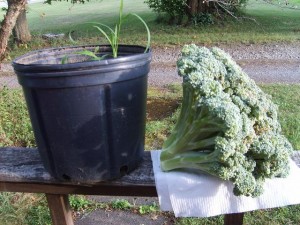 The pot is a 3 gallon tree pot.

Tomatoes are also coming ready fast, and I’m picking more and more every day. I’m impressed with Cherokee Purple, but I’m also eager to see how my heirloom Mr. Stripeys look when fully ripe. Other veggies like peas, lettuce, and cucumbers are also producing, though the former two are on their way out. Watermelons seem really good looking this year, and I can’t wait to try some of the orange-fleshed ones I planted. Acorn squash are forming on their vines, and I’m still hoping for a good-sized pumpkin, too.

So far, roadside sales have been poor this year, and I’ve had trouble moving my produce. I’ve joined up with Furniture City Foods to offer some of my stuff online, and I got my first order this morning. I’ll fill that, and maybe business will pick up. Maybe not. I’m also dabbling with possibly getting into a produce market in Jamestown, but I don’t know if that will happen or not. I think the best thing for my sales will be to have a shed/stand to sell out of. Maybe next year.

The trees and gooseberry/currant bushes are all still alive, though some look better than others. The heat and dry weather have been hard on them. I lost some of the raspberries, but if some survive that will be enough to do cuttings from, or they’re cheap enough that I can just replace them if need be. I do hope that all the trees make it, though.

Hay season is complete, with enough extra bales made to get the chickens through the winter with plenty of bedding.

So far, so good. Now to get back to blanching and freezing…