I purchased and planted 10 gooseberry + currant plants from Mike’s Nursery in Lakewood, NY. There are 2 Pixwell, 2 Poorman, 2 Red Lake, 2 Crandall, and a cross called the Jostaberry. I also mail-ordered bareroot Hinnomaki Red and Tixia gooseberries and Pink Champagne and Blanka currants from Nourse Farms in Massachusetts. This was done after a recommendation from Abers Acres, and also to fill out the row better because it looks pretty short compared to the tree and cane fruit rows. The new ones are supposed to be here within the next day or two and will be planted immediately, weather permitting.

All raspberries and blackberries have been planted (25). 1 appears to have died, but will be left and given a chance to regrow if it is in the cards. If not, it will be replaced at a later date. Another previously thought to have died has recovered since the rain came. The rest all seem vigorous and are sending out new growth. The ‘Jewel’ black raspberries are doing especially well.

I have obtained 6 more grape vines in a mixture of Himrod, Canadice, and Concord. I still have 2 vigorous Red Caco from the last batch, and most of the frosted-off ones (Fredonia and Concord) are also regrowing buds. They are waiting in pots until the time of their planting.

I have 2 italian plums and a 5-in-1 grafted pear that are waiting to go in. I will be getting more in the future, and probably at least a few more this year, but this is a good start. They are fenced with 4-foot chicken wire or welded-wire garden fencing which seems to strongly deter deer, even though the tops of the trees stick out much higher than 4 feet in all cases except the North Stars.

I also have 4 baby apricot trees that are 1 year old, and a new plum just sprouted. These will go into the ground once I raise them for a few more years. If they grow anything like the 4 peach trees I grew from pits, the 1-year-olds will be ready to go into the ground in another year or maybe 2. I have many other pits in the dirt and am waiting to see if any sprout.

The chickens have a wire run now, and they love it. I am waiting until they are closer to being full-sized before I let them out in the lawn proper, but the run gives them a good, safe alternative for now. I did the first full cleaning of their coop a few days ago, adding to my compost pile. 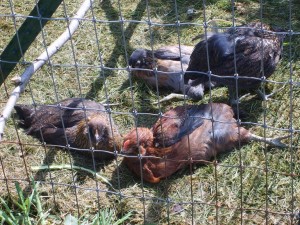 The garden is disced up and will soon be ready for planting, once finishing touches are put on it and the weather dries up for a few days.

I’ve been selling a few jars of maple syrup here and there, waiting for the growing season to begin. I am looking at a mid-May planting date, like I usually do. I could put in some crops earlier, such as kale, peas, or onions, but it is easier for me to simply cultivate the land and plant it all in one go. The seeds are all purchased for the most part. I will just be purchasing some started plants for things like tomatoes and broccoli.

I picked up 16 more raspberry starts, 8 black and 8 red, at the Frewsburg spring consignment auction. This is added to the 5 raspberries and 4 blackberries we already have, so we should get a pretty good little bush of them established if they all survive and so forth. I also purchased 8 grape vines, but they were severely nipped by a hard freeze on a night it wasn’t expected, so they have yet to recover. I will have to just wait and see on those.

I plan to order some other small fruits like gooseberries and also some fruit trees to put in if everything permits. It may get partially put off to next year, but it will happen.

The chickens are still growing fast! They are around 6 weeks old now, and are getting fully feathered. These are pictures from a little over a week ago, so they’re even bigger and more feathered now. 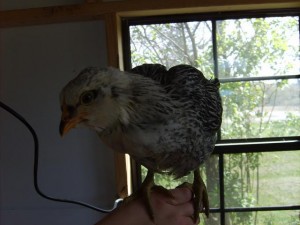 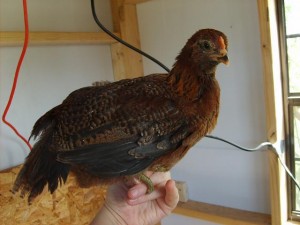 Their coop has also seen big progress. They are outside in it now, and have been for around two weeks. We still have yet to put the wire run on the front of it, and the next boxes onto the back, but it is secure and liveable for them, which is the main thing. They won’t start laying for another 3-4 months, and we have a little time before the run becomes more necessary, but they are definitely way too big to be in the house anymore! 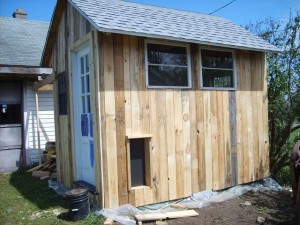